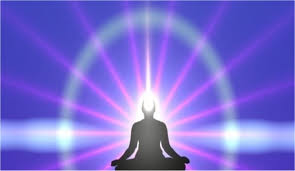 "When you possess light within, you see it externally."
~ Anais Nin ~
Sometimes life feels like we're standing
In a cave in the pitch dark
And can't see anything at all-
Not even our hand in front of us-
And we have to take a step.
It requires blind (literally)
Trust.
And we may have to grope and stumble for a bit,
But eventually....
Eventually,
We will see some kind of light somewhere
And be able
to move
in its direction.
I trust the light.
Posted by Nathalie W. Herrman at 6:16 PM

I bought some lovely ornamental grass for the garden today, and when I loaded it into the car, I noticed that it shed its fluffy ends some. And when I unloaded it, I realized that the seeds were all over. They were stuck to a towel, and the floor rug, and the seat, and there was no blowing or shaking them out. They were lodged fast. I considered if that's what it did in my car, it would likely do that in the earth, so if these seeds were fertile, I may have just bought myself an invasive nightmare.

I googled it to confirm, and yes indeed. There, online, were folks like me who had brought it home and planted it and now it was everywhere and impossible to control.

I won't be planting this grass.

And I will remember the lesson, and notice all the ways it applies to life.

I watch for unwanted spreading of all kinds, and take care to stop it fast.

THE BEST WE CAN DO IS GOOD ENOUGH

"I used to worry about what other people think of me until I realized, they don't."
~ Colloquial Saying ~
I have to be vigilant at night when I'm tired
That my thoughts don't turn on me
And make me second guess every decision I've made during the day.
I seem to have this built in anxiety around
What other people think,
Or might think,
About what I've said or done,
The world does not turn according to my plans and decisions.
I am both smaller and larger than I think.
Posted by Nathalie W. Herrman at 9:35 PM

OVER AND OVER AGAIN

"Little fears love to walk on stilts."
~ Henry Stanley Haskins ~
Every time we're faced with a new uncertainty,
The same old fears tend to come up-
That it won't work out,
That we are doomed,
Or whatever our favorite fears may be...
And the truth is that
Maybe it won't work out in the way that we hope,
But life has shown us
Over and over and over again,
That whatever it is, we get through it,
And it always works out somehow
And no matter what,
We're ok.
I stop feeding my fears and live free.
Posted by Nathalie W. Herrman at 9:26 PM

WELL-BEING AT THE DEEPEST LEVEL

"God offers to every mind its choice between truth and repose. Take which you please- you can never have both."
~ RW Emerson ~
To be truly honest with ourselves and others takes courage
And trust.
It seems easier most of the time to pretend,
Or deny,
But in the long run,
And at the level of our
Soul's well-being,
It's not.
I have the courage to speak my truth.
Posted by Nathalie W. Herrman at 9:37 PM

"Watch it unfold live."
~Evan I. Schwartz ~
It goes both ways:
Sometimes we sweeten things in our minds in anticipation,
And when they actually happen,
we feel jolted,
and let down;
Or,
We expect the worst,
And end up delighted instead.
So what's the message?
Be the observer of it all.
I am the unassociated witness of life happening.
Posted by Nathalie W. Herrman at 10:41 PM 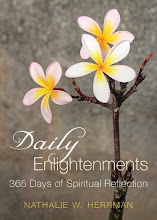 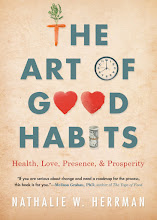